This was an exciting year for the Institute for Women’s Policy Research. In 2014, we published over 50 reports, fact sheets, and briefing papers. We received more than 1,700 citations in the media and participated in more than 175 speaking engagements. Below are our top 5 findings of 2014 (plus a bonus!). Let us know which one you found most surprising on Twitter or Facebook using #IWPRtop5. 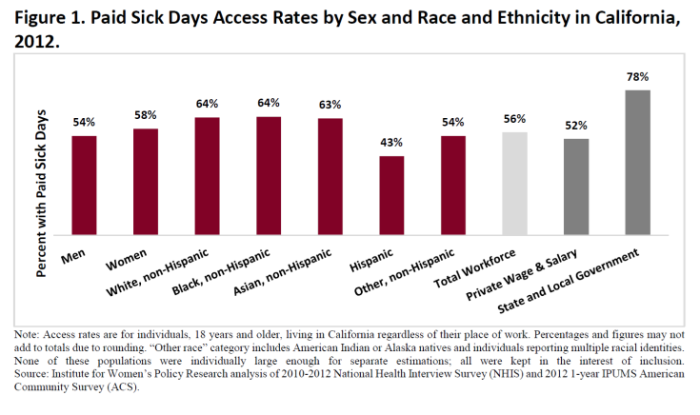 Earlier this year, the Institute for Women’s Policy Research provided analytic support to help California become the 2nd state in the nation to guarantee paid sick days to  workers who need them.

2. Equal pay for working women would cut poverty in half.

IWPR analysis shows that the poverty rate for working women would be cut in half if women were paid the same as comparable men. IWPR’s analysis—prepared for use in The Shriver Report: A Woman’s Nation Pushes Back from the Brink and produced with the Center for American Progress—also estimates an increase in U.S. GDP by 2.9 percent in 2012 if women received equal pay.

This September, IWPR released a short preview of its forthcoming Status of Women in the States report, featuring material from the chapter on women’s employment and earnings with grades and state rankings. The preview was featured in more than half of the states and received more than 150 press citations, with dedicated articles and reprints of the grades in The Washington Post, The Boston Globe, and Time.

The analysis found that eight of the top eleven states that received a grade of B or higher are located in the Northeast. In addition to West Virginia, seven of the fourteen lowest ranked states, which received a grade of D+ or lower, are located in the South: Alabama, Louisiana, Arkansas, Mississippi, Kentucky, Tennessee, and South Carolina. Wyoming, Idaho, Oklahoma, Indiana, Utah, and Missouri round out the bottom group.

Last month, the Institute’s Student Parent Success Initiative released two fact sheets: one outlining the number of student parents and one that highlights the decline of campus child care even as more parents attend college.

IWPR found that women are 71 percent of all student parents, and single mothers make up 43 percent of the student parent population. Women of color are the most likely students to be raising children while pursuing a postsecondary degree. The research was featured in in-depth pieces by Ylan Q. Mui at The Washington Post and Gillian B. White at The Atlantic, and in popular posts on Quartz, Jezebel, and The Chronicle of Higher Education.

5. *Tie* If current trends continue, women will not receive equal pay until 2058 or achieve equal representation in Congress until 2121.

The Institute updated its benchmark fact sheet, The Gender Wage Gap, and calculated that, at the recent rate of progress, the majority of women will not see equal pay during their working lives: a gap will remain until the year 2058. The projection was featured in news stories by The Huffington Post, The Atlantic, The Nation, Forbes, and others.

Another IWPR projection analyzed the current rate of progress in women’s political leadership and found that women in the United States will not have an equal share of seats in Congress until 2121. To address this disparity, IWPR published results from an in-depth study, Building Women’s Political Careers: Strengthening the Pipeline to Higher Office, which details findings from interviews and focus groups with experienced candidates, elected officials, state legislators, and congressional staff members. The projection and the study were featured in The Washington Post, Slate, and TIME.

Bonus: More than half of working women are discouraged or prohibited from discussing pay at work.

As part of its 2010 Rockefeller survey of women and men following the Great Recession, IWPR found that more than half of working women, including 63 percent of single mothers, are discouraged or prohibited from discussing their pay at work. These data provided the first snapshot of how prevalent pay secrecy is at American workplaces and received renewed attention in 2014 when President Obama signed an executive order in April requiring greater pay transparency among federal contractors. IWPR’s research on pay secrecy was heavily featured in coverage throughout the year, including pieces in The New York Times, The Atlantic, Marie Claire, TIME, Slate, and others, as well as interviews with IWPR experts on NPR’s Morning Edition, MSNBC’s The Rachel Maddow Show, and PBS NewsHour.

Your still have a chance to make research count for women in 2014. Click here to make a tax-deductible donation to IWPR.

Jourdin Batchelor is the Development Associate at the Institute for Women’s Policy Research.