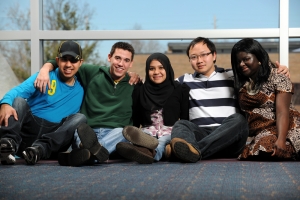 The Woodrow Wilson Center and United States Agency for International Development (USAID) brought together a panel of four male leaders to discuss the possible roles men can play in combating gender-based violence. The event, Male Leaders Speak: Critical Strategies for Combatting Gender-Based Violence, launched USAID’s 16 Days of Activism Against Gender Violence, that began on November 25, the International Day for the Elimination of Violence Against Women, and ends on December 10, the International Human Rights Day.

Most of the conversation was focused on the situation of girls and women in Africa. Donald Steinberg from USAID shared his experiences serving as former U.S. Ambassador to Angola, and Major General Patrick Cammaert (retired) spoke about his time when he was former United Nations Force Commander for the Eastern Democratic Republic of Congo.

One of the topics of discussion was on changing attitudes surrounding violence against women. IWPR’s research on the status of women in the Middle East has shown that sometimes attitudes of men and women do not match when it comes to violence. For example, in Yemen, 6 percent of women report that domestic violence is widely or somewhat tolerated within their families or tribe, while 13 percent of men state that violence is widely or somewhat tolerated. According to an IWPR survey in Lebanon, women with higher levels of education were less likely to accept domestic violence than those with lower levels of education. Among men, approximately one in ten found it acceptable for a husband to beat his wife—regardless of levels of education.

Jimmie Briggs, co-founder of the Man Up Campaign, argued that early education to challenge the typical “manhood” stereotype—that boys can feel they need to live up to—is one way to prevent the continuation of sexual violence from one generation to the next.

During the panel, Steinberg pointed out that women made up the majority of the audience. This has been typical for events I have attended on women’s issues. In fact, the most surprising aspect of this event may have been that the panelists speaking about violence against women were all men. Clearly, ending sexual violence will not be possible without the joint effort of men and women.

In order to also solve discrimination against women in the United States, the approach must take into account that women cannot achieve equity without male allies. The entire population, not just a half of the population, needs to want gender equality in economic, political, and social realms.

Find out more about upcoming events taking place during the 16 Days of Activism Against Gender Violence on the website.

Amanda Lo is the Communications Intern at the Institute for Women’s Policy Research.